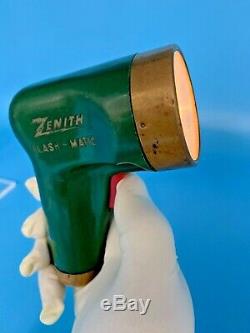 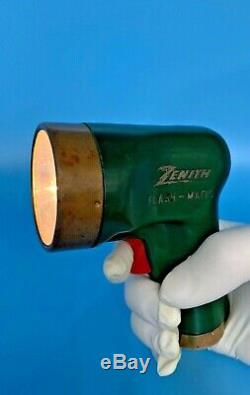 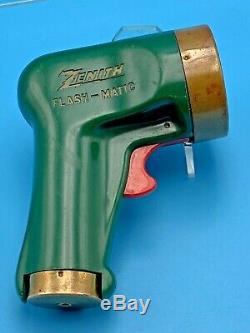 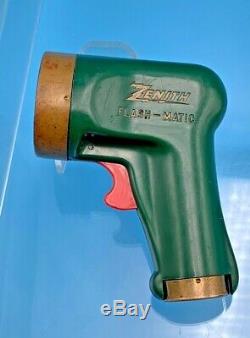 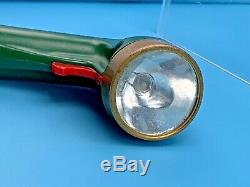 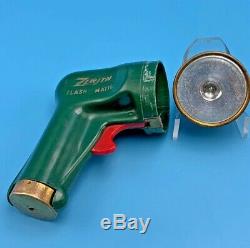 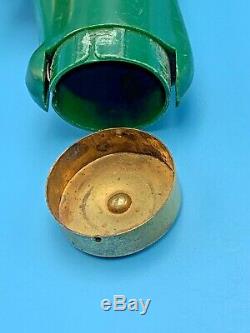 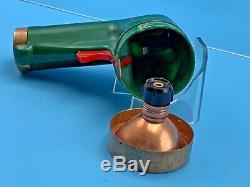 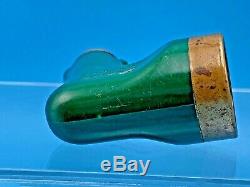 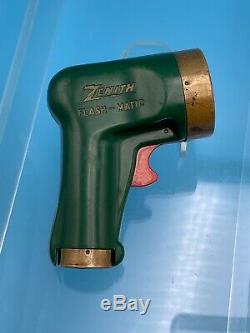 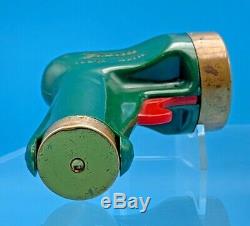 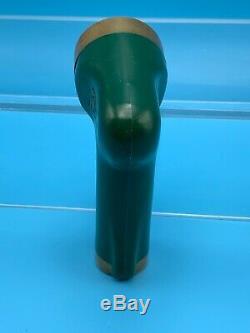 Worlds first wireless TV remote control from 1955. Very good original WORKING condition. I UPDATED THE PICTURES MAY 11, 2019 TO SHOW IT WORKING. THE FIRST 2 PICTURES SHOW THE REMOTE WITH 2 C BATTERIES IN THE UNIT. THIS IS WHY THE BATTERY COMPARTMENT BASE IS NOT FLUSH WITH THE UNIT.

WHEN THE BATTERIES ARE NOT IN THE REMOTE THE BATTERY COMPARTMENT BASE IS FLUSH WITH THE REMOTE. THE PICTURES ARE THE DESCRIPTION. IF YOU NEED MORE PICTURES JUST ASK. Ok so this is basically a green colored flash-light, but it is also a rare piece of TV and social history. The first wire TV remote control was invented by the US company Zenith in 1951 and called the Lazy-bones.

Then in 1955 a designer Eugene Polly working for Zenith produced this the worlds first wireless remote control. By setting light sensors into the corners of the TV set, the user from the comfort of their own chair could turn the set on or off and change the channels.

In reality it was a great idea which came with serious glitches, not least because ambient light in the room could also trigger the sensors by mistake. By 1956 the Flash-matic was superseded by the Zenith Space Command serie s of controllers that worked not off light but sound. During the 12 months of production it has been estimated that only 30,000 Flash-matics were produced. There is no certainty as to how many still exist today, but over the years many would have been simply discarded (not least because they can easily be confused with a childs torch).

I tested it with 2 C Batteries as-is and it did not light. I REMOVED THE OLD BULB AND REPLACED IT WITH A GOOD ONE AND IT WORKS GREAT!!

It had only one button that was used to power on and off, channel up, channel down, and mute. The Flash-matic's phototechnology was a significant innovation in television and allowed for wireless signal transfer previously exclusive to radio. Earlier remotes could turn sets on/off and change channels, but were connected to the TV with a cable. The Flash-matic came in response to consumer complaints about the inconvenience of these cables running from the transmitter to the TV monitor.

Earlier remotes served as the central control system for transmitting complex signals to the receiving monitor. The Flash-matic instead placed the complexity in the receiver as opposed to the transmitter. It used a directional beam of light to control a television outfitted with four. In the corners of the screen. The light signal would activate one of the four control functions, which turned the picture and sound on or off, and turned the channel tuner dial clockwise and counter-clockwise.

The bottom receptors received the signal to mute and power on/off, and the upper cells received signals to channel up/down. In order for the various signals to be received by the monitor, the remote control had to be directed towards one of the four photocells. The system responded to full-spectrum light so could be activated or interfered with by other light sources including indoor light bulbs and the sun. Despite these defects, the Flash-matic remained in high demand. In September 1955, Zenith released an apology for its inability to meet the high demand of consumers.

The Flash-matic was quickly replaced by new control systems. The "Zenith Space Command" remote control went into production in 1956 with aims to improve upon the Flash-matic's design. The Flash-matic was marketed as an interactive technology for tuning device for the television.

Was the first control feature to be included on a remote control while unavailable on the monitor. The advertisement campaign for the Flash-matic remote control noted its ability to shut off annoying commercials while the picture remains on the screen. The mute button was explicitly designed for the purpose of tuning out of commercials. As a result of this new feature as well as the Flash-matic's pistol shape, the Flash-matic's ad campaigns invited viewers to "shoot" the annoying commercials or announcers that they were tired of listening to, while leaving the image present so that the viewer would know when to turn the sound back on.

PLEASE SEE PICTURES FOR EXACT CONDITION. The item "Vintage Zenith Flash-Matic Remote Control 1955 First Wireless Remote RARE WORKS" is in sale since Monday, February 4, 2019. This item is in the category "Collectibles\Radio, Phonograph, TV, Phone\Other Vintage Radio, TV, Phone". The seller is "fnaf_hq" and is located in Fort Worth, Texas.

This item can be shipped to United States, all countries in Europe, Canada, China, Japan, Australia.